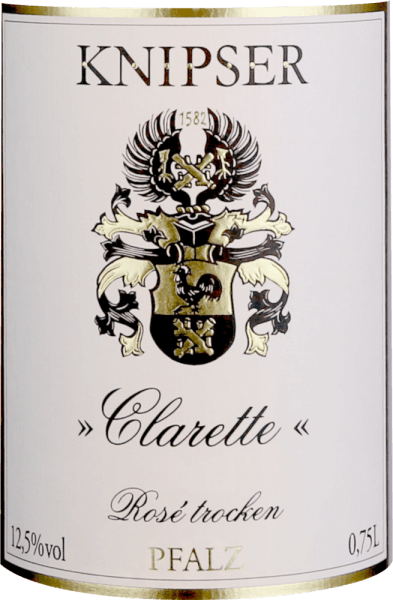 Wichtige Eckdaten
Close menu
Description More information
Description
The Knipser Clarette Rosé is accompanied by a wonderful contradiction. On the one hand, this... more
Close menu

The Knipser Clarette Rosé is accompanied by a wonderful contradiction. On the one hand, this rosé cuvée was made from the most powerful grape varieties of the Palatinate, on the other hand, this wine offers an elegant drinking flow that is difficult to slow down. This Rpsé underlines impressively that the 3 times best awarded VDP winery Knipser also vinifies in the basic segment simply ingenious wines.

The Cabernet grape varieties (Cabernet Sauvignon and Cabernet Franc) bring strength - the Sankt Laurent the juice. The Clarette Rosé from Knipser comes with a delicate strawberry-pink in the glass and shows a fragrant animation with light hints of strawberry punch, wild raspberries and peony. All this is so elegant and multi-faceted that we don't dare to take the nose out of the glass.

On the Clarette by Knipser it says SOMMER in capital letters and you know exactly - that is the German answer to the Provencal rosé.

Vinification of the Knipser Clarette Rosé

The Bordeaux classics Cabernet Sauvignon, Cabernet Franc and Merlot come together perfectly in this Palatinate rosé wine. The Clarette is complemented by various Cabernet crosses from Cabernet Cubin to Cortis. The fact that not only Provence but also Bordelais is cited here can be seen by its name, because it is not far from Clarette to the Clairet wines from Bordeaux. The particularly elegant aroma of the Clarette is also ensured by the particularly cool fermentation of the must in the stainless steel tank after the mash tank has been drawn off using the Saignée method.

Food recommendation for the Clarette Rosé by Knipser

Enjoy this dry rosé from Germany either in large sips solo or as an aperitif with light meals.

"The Clarette is a revelation and the best of its kind in Germany."
Der Feinschmecker (The Gourmet) 2018/2019

"A wonderfully fresh, fruity-sweet and yet racy wine that sets standards in this category, which is mostly dominated by banal wines, and is hardly to be found a second time in this quality in Germany".
Der Feinschmecker (The Gourmet) 2015

"The Rosé Clarette is delicious, the Cabernet Sauvignon produces the intense fruit, it is sparkling clean, not marmalade, neither yoghurt nor raspberry soda, but deliciously juicy and palatable."
Acorn man 2015