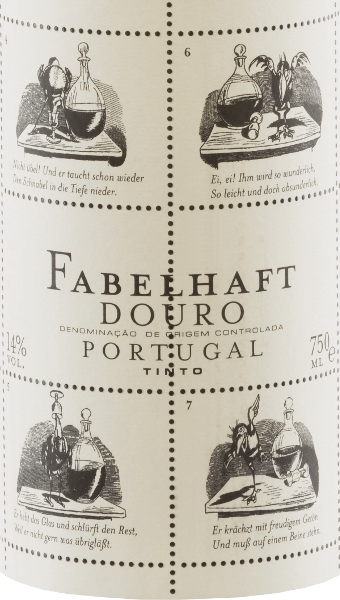 On the palate, the Fabelhaft Tinto reveals an elegant, voluminous and youthfully fresh taste with a perceptible mineral profile. A beautiful, lively fruit acid and soft tannins complete the balanced palate feeling.

In the Fabelhaft Tinto, not only the content but also the appearance of the red wine bottle is remarkable. For this, Dirk Niepoort chose a story by Wilhelm Busch, currently that of the raven Hans Huckebein. His life came to a bad end, not least through the consumption of alcohol, and has coined the term "unlucky raven" to this day. Fables like Huckebein's are the reason why Niepoort named this wine series Fabelhaft - and they taste like that!
With Fabelhaft Tinto, Dirk Niepoort has proven that red wines full of character from Portugal are possible at a fair price. Not only that, with his Wilhelm Busch label he has also created a wine that is immediately recognizable.

Vinification of the Fabelhaft Tinto

After selecting the grapes in the cellar, the grapes were destemmed, crushed and fermented. After the fermentation the wine matured to 15% for 12 months barriques of French oak (second allocation).

Food recommendation for the Fabelhaft wine Tinto from Niepoort

Enjoy this Portuguese red wine with pasta with spicy vegetable or meat sauces, with pizza and with beef or pork dishes.

Colheita Port 2006 - Feuerheerd's
Feuerheerd's
26.10 £*
Content 1 liter(s)
Content 1 liter(s)
This website uses cookies, which are necessary for the technical operation of the website and are always set. Other cookies, which increase the usability of this website, serve for direct advertising or simplify interaction with other websites and social networks, will only be used with your consent. More information
Decline Accept
Top