If you have already found your personal favourite white wines and red wines and are ready for a new taste experience, you really ought to take a closer look at our rosé wine selection. We promise: Enticing surprises await you. 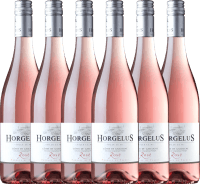 For a long time, rosé wine just wasn’t taken that seriously. But the word about that mistake has been getting around: Rosé wine has been becoming increasingly popular with wine lovers over the past few years. Well-chilled, it is an excellent summer wine for hot days.

The Popularity of Rosé Wine

The growing popularity of  rosé wine is also supported by statistics: While rosés made up just two percent of the market a few years ago, it now makes up eight percent. It still has a relatively small distribution compared to white and red wines, which is due to a persistent misconception. Many people who aren’t involved with wine on a regular basis believe that rosé is simply made by mixing white wine with red. That is, however completely false. At least any self-respecting European vintner would indignantly refrain from such a practice. Following severe protests, an EU legislative proposal to allow this method fell through for exactly that reason. Red and white wines may only be mixed in the production of sparkling rosé wines. Outside of Europe, at least some of the cheapest rosés, are in fact made by mixing red and white wine.

The truth is roséweine is made from crushed red wine grapes and then fermented like a white wine. There are a few various methods that differ only slightly from one another – and they can be recognised by the colour of the finished rosé wine. If the red grapes are pressed but not chopped, and the liquor is then fermented without skin, a very light rosé is the result, and it has a tender, delicate aroma. If, however, the grapes remain in the mash for even one or two days, the grape skins give the wine a stronger, raspberry red colour and a more intensive flavour.

The most intensive rosé comes from France and is made with the Saignée method. After a period of 12 – 48 hours, part of the unpressed mash is removed from the red wine fermentation vat, pressed, and then vinified as a rosé. The pomace (the solid material left after pressing) is then returned to the remaining red wine, and the grape skins reintroduced to the mash increase the colourants and tanninsproportionately. One might even say that rosé wine made with the Saignée method is a by-product of red wine production. Which doesn’t mean that it is of lower quality: Tavel, which comes from the Avignon region, is produced with the Saignée method, and many consider it the best rosé of all.

It should be mentioned that the combining of red and white wine is practiced in Europe as well - sort of. Rotling, also known regionally as Schillerwein or Schieler, is made from both white and red grapes. These, however are mashed and vinified together. White varieties used for rotlings are, for example, Riesling or Pinot Gris. The rotling, however, is never allowed to call itself a rosé!

Especially in the summer, a well-chilled rosé is the perfect companion to light dishes such as salads, tapas, antipasti or fish. As a rule, rosés do not have aging potential and should be consumed while they are still young. An exception is the abovementioned Tavel, which can also be left to mature in the bottle for a few years.

VINELLO
Hello
Welcome at our shop! Outside our opening hours it might take a little bit longer until we answer yourinquiry.