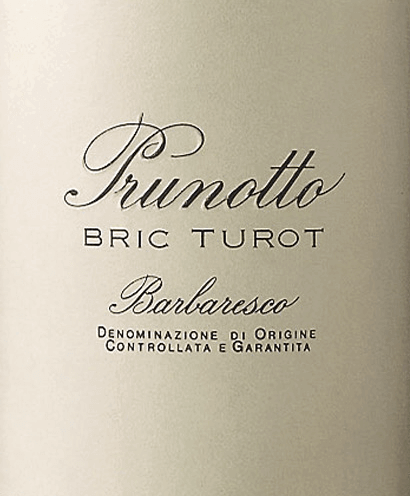 Wichtige Eckdaten
Close menu
Description More information
Description
The Bric Turot Barbaresco DOCG from Prunotto is a Cru from the vineyard of the same name. In the... more
Close menu

The Bric Turot Barbaresco DOCG from Prunotto is a Cru from the vineyard of the same name. In the glass the Bric Turot is intense garnet red with dark ruby red reflections. On the nose this red wine inspires with a complex variety of aromas with liquorice, small forest berries, cinnamon, cloves and violet notes. Structured, balanced and elegant, with full-bodied, velvety and ripe tannins that captivate the palate, the Bric Turot ends in a long and persistent finish that tastes of ripe red fruits.

In the Barbaresco area, the single vineyard Bric Turot is situated between Roncaglie and Tre Stelle. It covers an area of 5.3 ha, south-east-south-west oriented at 180 to 300 m.a.s.l., the soils consist mainly of marl with fossil sediments, with fine, easily friable parts and the presence of manganese, zinc and boron. The Nebbiolo grapes, which grow here, produce wines of excellent structure and elegance, with complex and appealing fragrances.
The selectively harvested grapes are destemmed and pressed, then macerated on the skins for 15 days and fermented at a controlled temperature. Malolactic fermentation is completed before the beginning of winter. The wine is then aged for at least 12 months in oak barrels of various capacities, including used and older French oak barriques. This is followed by at least one year in the bottle before the Bric Turot is sold.

Thanks to its structure and body, this delicious Barbaresco Cru is an excellent accompaniment to meat dishes and mature cheeses.
We recommend opening the Bric Turot about 6 hours before serving.

Awards for the Bric Turot Barbaresco DOCG by Prunotto